Yet, very little work has actually attempted to measure the value we place on battery life. “This is one of the first studies to quantify how much monetary value consumers place on the battery life of their smartphone”, said Simo Hosio, a post-doctoral researcher who led this study at the University of Oulu’s Center for Ubiquitous Computing in Finland.

The team conducted an experiment where volunteers spent a whole week taking part in live hourly auctions for “selling” their battery. “We did not just ask our volunteers to bid against each other for selling their battery, we actually consumed the battery on their devices,” said Prof. Vassilis Kostakos. The team developed software that identified the volunteer who had placed the lowest bid for selling their battery at each hourly auction, and then immediately begun draining 10% of the battery. When the draining was complete, that volunteer was rewarded according to their bid. 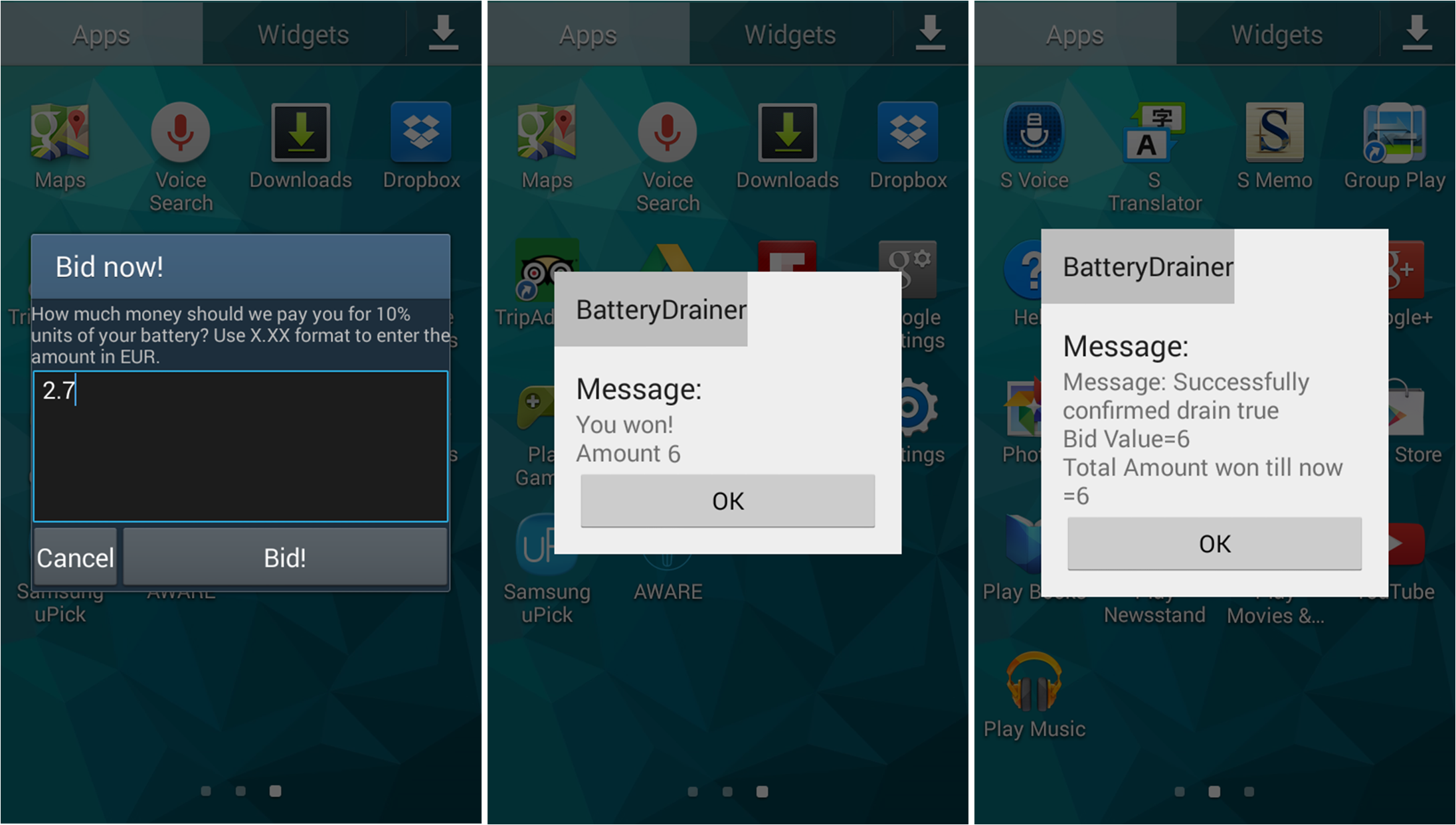 The study’s hourly auctions used a background application, which only presented itself to participants to ask for bids and notify about auction outcomes.

Over a week, the team collected more than a thousand bids, revealing that volunteers were willing to let go of 10% of their battery for an average of €2.22. However, as Hosio explains, there were important variations: “We noticed that our volunteers drastically increased their bids as their actual battery level got closer to zero”. Specifically, the team found that volunteers asked, on average, for €4.41 to let go of the final 10% of their battery, indicating that the final drops of energy are worth about twice as much.

The team explains how these results now enable us to understand better how and why we use our mobile devices. “What is exciting about our findings is that we are now able to measure the importance of different actions on your phone,” explains Kostakos. “For example, by looking at which applications a person uses on full battery vs. on low battery, we able to better estimate the relative importance that different applications and services have for consumers”.

To demonstrate this, the team calculated the “Expected Monetary Value” of different apps, by looking at the battery level of volunteers who launched those apps. They were able to identify the apps with the highest value, which include Viber, Chrome, Instagram, WhatsApp, and Facebook. Furthermore, “using our methodology, smartphone users can be classified based on the monetary and mental value they place on different apps,” said Hosio.

Looking forward, the team behind the study claims that the results are particularly useful in considering future resource-sharing applications. As Kostakos explains, “Scientists across the world are developing economic models whereby a set of mobile devices form a local conglomerate that shares resources such as data, bandwidth, and connectivity. The interesting question is how much should the consumers be rewarded for contributing resources in such a scenario?” The study, which will be presented in May at the CHI 2016 conference in San Jose, California, sheds light on how battery life is valued and could be reimbursed.

“I had a chance to share my knowledge as a professional regarding the employment in my field.” Do you have a university degree and a genuine interest to help a student? Apply to become a mentor in our mentoring programme until Oct 6th! oulu.fi/en/mentoring #UniOulu #mentoring pic.twitter.com/scGQ…

Welcome to Day 1 of #PIMRC2021! "#Sustainability is an increasingly important topic also for the #wireless #research #community. Lots of #technologies can be utilized to try to solve the #global #challenges we are facing," says @LatvaMatti @UniOulu:
bit.ly/3EaNbLE #6G pic.twitter.com/S9d1…

@tianyin_xu @roopshasamanta We are organizing 1st negative result workshop (PerFail) with #PerCom2022 (perfail-workshop.git…). If you have similar exp. about works that didnt make it from which sytems/netwking community can learn, please consider submitting.
Please also share with other colleagues.

Our PhD researcher Jonas Oppenlaender will defend his thesis "Crowdsourcing creative work" 17.9.2021 at 9am. Find the zoom link, thesis, and other information here and join us to cheer @Duesynapse! oulu.fi/university/n…

Student: next week you can get a COVID-19-vaccination at the Linnanmaa Campus! 💉 The Saalastinsali vaccination site is open 3.-17.9. between 9 a.m. and 3 p.m.

#minätutkin I study perception, performance, and plausibility in #VirtualReality and #telepresence experiences taking place in abnormal scales. It connects to our group's theme "perception engineering": how to engineer illusions for the human brain in #VirtualReality @UniOulu

Had a great start to #make4change with #ODLstartti verstas in the intro to #digitalfabrication workshop with #inkscape and #vinylcutter. Looking forward to the building more skills with this inspired bunch! pic.twitter.com/ttmR…

@iameevamaria Sorry to hear - people are currently busy with starting semester and Academy of Finland deadlines I assume. We have no general info address.

Today we are delighted to introduce our University to the Ambassador of India @raveesh_kumar. We had a productive discussion on how to enhance our future collaboration. #UniOulu @IndEmbFinEst 🇫🇮🇮🇳 pic.twitter.com/Yhh9…