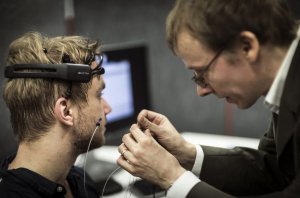 Our research on Virtual Reality (VR) is featured in today’s edition of Kaleva.

The experiment was a joint collaboration effort involving the Centre for Ubiquitous Computing, the Interact Research Unit, and the LeaForum Human Lab, in an attempt to test the VR technology from the user’s perspective, and investigate potential health issues, common to VR users such as cyber-sickness. The results can also be used to further develop virtual distance events and to improve the concert experience.

“I had a chance to share my knowledge as a professional regarding the employment in my field.” Do you have a university degree and a genuine interest to help a student? Apply to become a mentor in our mentoring programme until Oct 6th! oulu.fi/en/mentoring #UniOulu #mentoring pic.twitter.com/scGQ…

Welcome to Day 1 of #PIMRC2021! "#Sustainability is an increasingly important topic also for the #wireless #research #community. Lots of #technologies can be utilized to try to solve the #global #challenges we are facing," says @LatvaMatti @UniOulu:
bit.ly/3EaNbLE #6G pic.twitter.com/S9d1…

@tianyin_xu @roopshasamanta We are organizing 1st negative result workshop (PerFail) with #PerCom2022 (perfail-workshop.git…). If you have similar exp. about works that didnt make it from which sytems/netwking community can learn, please consider submitting.
Please also share with other colleagues.

Our PhD researcher Jonas Oppenlaender will defend his thesis "Crowdsourcing creative work" 17.9.2021 at 9am. Find the zoom link, thesis, and other information here and join us to cheer @Duesynapse! oulu.fi/university/n…

Student: next week you can get a COVID-19-vaccination at the Linnanmaa Campus! 💉 The Saalastinsali vaccination site is open 3.-17.9. between 9 a.m. and 3 p.m.

#minätutkin I study perception, performance, and plausibility in #VirtualReality and #telepresence experiences taking place in abnormal scales. It connects to our group's theme "perception engineering": how to engineer illusions for the human brain in #VirtualReality @UniOulu

Had a great start to #make4change with #ODLstartti verstas in the intro to #digitalfabrication workshop with #inkscape and #vinylcutter. Looking forward to the building more skills with this inspired bunch! pic.twitter.com/ttmR…

@iameevamaria Sorry to hear - people are currently busy with starting semester and Academy of Finland deadlines I assume. We have no general info address.

Today we are delighted to introduce our University to the Ambassador of India @raveesh_kumar. We had a productive discussion on how to enhance our future collaboration. #UniOulu @IndEmbFinEst 🇫🇮🇮🇳 pic.twitter.com/Yhh9…